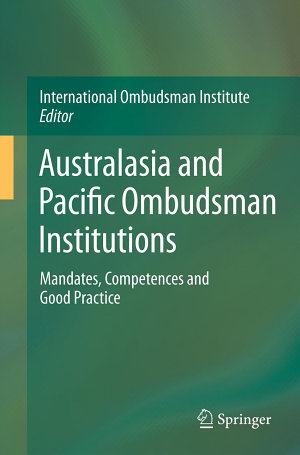 Commissioned by the International Ombudsman Institute (IOI), the Ludwig Boltzmann Institute of Human Rights (BIM) in Vienna conducted a comparative analytical study on Ombudsman Institutions in the Australasia and Pacific region between January 2011 and April 2012. In Part 1, this book provides an analytical comparison of the public sector Ombudsman Institutions in Australia (the Commonwealth Ombudsman and the state/territory Ombudsmen of all Australian states as well as of the Northern Territory and the ACT), the Cook Islands, Hong Kong, New Zealand, Papua New Guinea, Samoa, Taiwan, Tonga and Vanuatu. In addition to a comparative analysis showing the partial heterogeneity of the Institutions, a comprehensive overview of common features, and explorations of the specifics and peculiarities of the Institutions, Part 2 presents separate reports on the 16 different jurisdictions featuring their main functions as follows: - Legal basis, legal status and organisation, - Mandate, object of control and standard of control, - Powers, including legal quality and impact of the outcomes of investigative procedures, - Relationship to the administration, the judiciary and the legislator, and - Special characteristics. Part 2 is based on information provided by the Institutions themselves in questionnaires sent out at the outset of the study, an analysis of the respective establishing acts and other relevant laws, and on relevant scientific publications and the Institutions’ Annual Reports. The reports also refer to relevant legal provisions and include websites addresses for ease of reference. 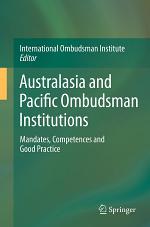 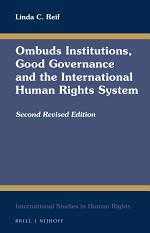 Authors: Linda C. Reif
Categories: Law
This book uses comparative law and comparative international law approaches to explore the role of human rights ombuds, classic-based ombuds and other types of ombuds institutions in human rights protection and promotion, their methods of application of international and domestic human rights law and their roles in strengthening good governance. 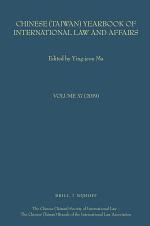 Authors: Linda C. Reif
Categories: Law
Volume 37 of the Chinese (Taiwan) Yearbook of International Law and Affairs publishes scholarly articles and essays on international and transnational law, as well as compiles official documents on the state practice of the Republic of China (ROC) in 2019. 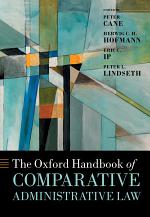 Authors: Peter Cane, Herwig C H Hofmann, Eric C Ip, Peter L Lindseth
Categories: Law
The comparative study of administrative law has a long history dating back more than 200 years. It has enjoyed a renaissance in the past 15 years or so and now sits alongside fields such as comparative constitutional law and global administrative law as a well-established area of scholarly research. This 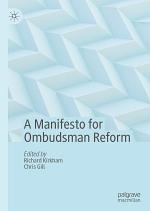 A Manifesto for Ombudsman Reform

Authors: Richard Kirkham, Chris Gill
Categories: Social Science
This book seeks to persuade policy-makers and legislators of the need for legislative reform of the ombudsman sector, and to evidence the ways in which such reformative legislation can be designed. In pursuing this goal, this edited collection represents an academic response to a challenge laid down by the current