I doubt not there are many who ignore the fact that in Eastern Africa, scarcely three hundred miles distant from Aden, there is a counterpart of ill-famed Timbuctoo in the Far West. The more adventurous Abyssinian travellers, Salt and Stuart, Krapf and Isenberg, Barker and Rochet, -not to mention divers Roman Catholic Missioners, -attempted Harar, but attempted it in vain. The bigoted ruler and barbarous people threatened death to the Infidel who ventured within their walls; some negro Merlin having, it is said, read Decline and Fall in the first footsteps of the Frank. Of all foreigners the English were, of course, the most hated and dreaded; at Harar slavery still holds its head-quarters, and the old Dragon well knows what to expect from the hand of St. George. Thus the various travellers who appeared in beaver and black coats became persuaded that the city was inaccessible, and Europeans ceased to trouble themselves about Harar.It is, therefore, a point of honor with me, dear L., to utilise my title of Haji by entering the city, visiting the ruler, and returning in safety, after breaking the guardian spell.The most auspicious day in the Moslem year for beginning a journey is, doubtless, the 6th of the month Safar, on which, quoth the Prophet, El Islam emerged from obscurity. Yet even at Aden we could not avail ourselves of this lucky time: our delays and difficulties were a fit prelude for a journey amongst those "Blameless Ethiopians," with whom no less a personage than august Jove can dine and depart.On Sunday, the 29th October, 1854, our manifold impediments were pronounced complete. Friend S. threw the slipper of blessing at my back, and about 4 P.M. embarking from Maala Bunder, we shook out our "muslin," and sailed down the fiery harbour. Passing the guard-boat, we delivered our permit; before venturing into the open sea we repeated the Fatihah- prayer in honor of the Shaykh Majid, inventor of the mariners' compass, and evening saw us dancing on the bright clear tide, whose "magic waves," however, murmured after another fashion the siren song which charmed the senses of the old Arabian voyagers. Suddenly every trace of civilisation fell from my companions as if it had been a garment. At Aden, shaven and beturbaned, Arab fashion, now they threw off all dress save the loin cloth, and appeared in their dark morocco. Mohammed filled his mouth with a mixture of coarse Surat tobacco and ashes, -the latter article intended, like the Anglo-Indian soldier's chili in his arrack, to "make it bite." Guled uncovered his head, a member which in Africa is certainly made to go bare, and buttered himself with an unguent redolent of sheep's tail; and Ismail, the rais or captain of our "foyst," the Sahalah, applied himself to puffing his nicotiana out of a goat's shank-bone. Our crew, consisting of seventy-one men and boys, prepared, as evening fell, a mess of Jowari grain and grease, the recipe of which I spare you, and it was despatched in a style that would have done credit to Kafirs as regards gobbling, bolting, smearing lips, licking fingers, and using ankles as napkins. Then with a light easterly breeze and the ominous cliffs of Little Aden still in sight, we spread our mats on deck and prepared to sleep under the moo

Authors: Richard Francis Burton
Categories:
I doubt not there are many who ignore the fact that in Eastern Africa, scarcely three hundred miles distant from Aden, there is a counterpart of ill-famed Timbuctoo in the Far West. The more adventurous Abyssinian travellers, Salt and Stuart, Krapf and Isenberg, Barker and Rochet, -not to mention divers
Language: un
Pages: 230

Authors: Richard Burton
Categories:
One of the great adventure classics. Victorian scholar-adventurer's firsthand epic account of daring 1854 expedition to forbidden East African capital city. A treasury of detailed information on Muslim beliefs, manners and morals; plus pleasures and perils of the desert. A wealth of geographic, ethnographic and linguistic data. 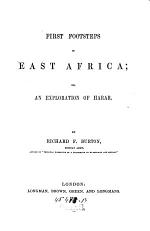 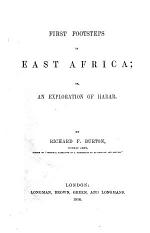 First Footsteps in East Africa, Or, An Exploration of Harar

First Footsteps in East Africa, Or, an Exploration of Harar;

Authors: Richard Francis Burton
Categories: Africa, Eastern
This work has been selected by scholars as being culturally important and is part of the knowledge base of civilization as we know it. This work is in the public domain in the United States of America, and possibly other nations. Within the United States, you may freely copy and