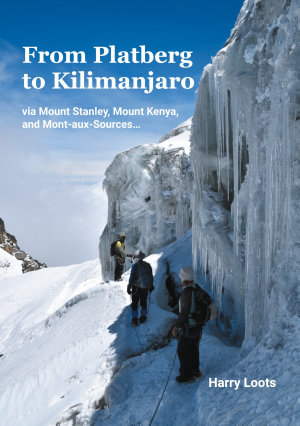 Harry started his journey to climb Africa's three highest mountains on Platberg. On his way to the summit of Kilimanjaro, he also climbed in Tenerife, Morocco, Ethiopia, Uganda, and Kenya. But long before that, as a child, he stood on the summit of Mont-aux-Sources, and thought he was on top of the world. On his travels, he argued with park authorities who refused to let him climb Teide in Tenerife - because it had snow on it! Got scrubbed in a hammam by a matronly figure. Who washed everywhere - yes, even there... Drank tea with a marijuana farmer in the Rif Mountains. Drove in the driver's cabin of an African train through Kenyan plains. Crossed the Tanzanian border on the back of a Boda-boda (motorcycle taxi). And diced with death on buses that 'sidestepped' oncoming traffic like professional bullfighters on Kenyan roads. On Jbel Toubkal his fingers got so cold they stopped working. In the Simien mountains he became a language teacher. And finally, on Kilimanjaro, where a simple bite on an energy bar left him breathless, he wondered why he took so long to get around to climbing this spell-binding mountain. Harry shares some of the problems he's had with trekking organisers. Like running out of food on the Rwenzori mountains. Handing over tips for porters that were apparently part of the trek but were never seen. Having to put up with inefficient equipment on Kilimanjaro. He details each day's trekking destination, distance and height gained. He briefly tells the history of the first ascents and naming of the peaks. And shares observations made along the way. Some of which will make you smile and others which will touch you emotionally. It's part travel story, part guidebook. With information for both the prospective trekker and the armchair traveller.