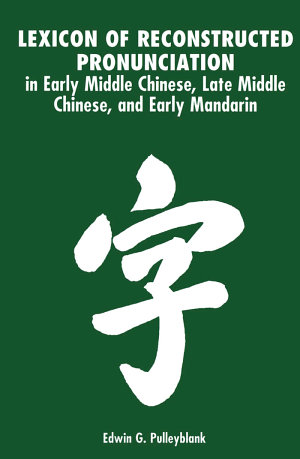 Known for his pioneering work in Chinese historical phonetics, Edwin Pulleyblank has compiled this Lexicon to present in convenient dictionary form the result of his researches on the phonology of Middle Chinese and its evolution to Mandarin. The Lexicon complements Pulleyblank's earlier book, Middle Chinese, by providing reconstructed pronunciation for approximately 8,000 Chinese characters at three historical stages. Early Middle Chinese is the language of the Qieyun rhyme dictionary of AD 601, which codified the standard literary language of both North and South China the preceding period of division. Pulleyblank's reconstruction is a thorough reworking of that of Bernhard Karlgren, completed in the twenties, and in some respects differs radically from it. Late Middle Chinese is the standard language of the High Tang Dynasty, based on the dialect of the capital, Chang'an. It has not been reconstructed previously as a separate stage but is of special importance, since it is the ancestor of most modern dialects. Early Mandarin represents the speech of the Yuan capital, Dadu (present Beijing), around the year 1300, for which Pulleyblank's reconstruction differs considerably from that of Hugh M. Stimson. The sources and methods used in these reconstructions were fully discussed in Middle Chinese, but recent developments in phonological theory have led to some modifications in detail. The entries are arranged alphabetically according to the Pinyin system with an index, by the traditional Kangxi radical and stroke numbers. The Morohashi number is also given for each character, enabling easy reference to this important Chinese thesaurus. Another useful feature of the Lexicon is the inclusion of the numbers in Karlgren's Grammata Serica for characters that are included in that work. Concise English equivalents for the Chinese words are also provided. Reconstructed forms are given in the International Phonetic Alphabet. Though this requires a number of phonetic signs and diacritical marks, these are carefully explained in the introduction. Every effort has been made to provide a useful tool for students of Chinese literature and China's relations with foreign countries, as well as for specialists in Chinese linguistics. 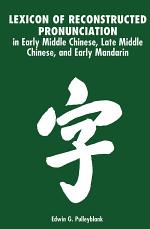 Authors: Edwin G. Pulleyblank
Categories: Foreign Language Study
Known for his pioneering work in Chinese historical phonetics, Edwin Pulleyblank has compiled this Lexicon to present in convenient dictionary form the result of his researches on the phonology of Middle Chinese and its evolution to Mandarin. The Lexicon complements Pulleyblank's earlier book, Middle Chinese, by providing reconstructed pronunciation for
Language: en
Pages:

Lexicon of reconstructed pronunciation in Early Middle, Late Middle chinese and in mandarin 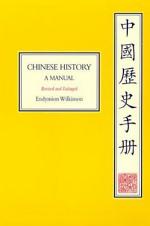 Authors: Endymion Porter Wilkinson, Scholar and Diplomat (Eu Ambassador to China 1994-2001) Endymion Wilkinson
Categories: History
Endymion Wilkinson's bestselling manual of Chinese history has long been an indispensable guide to all those interested in the civilization and history of China. In this latest edition, now in a bigger format, its scope has been dramatically enlarged by the addition of one million words of new text. Twelve 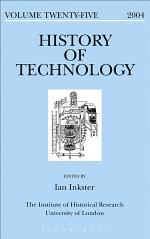 Authors: Ian Inkster
Categories: History
The technical problems confronting different societies and periods and the measures taken to solve them form the concern of this annual collection of essays. It deals with the history of technical discovery and change and explores the relationship of technology to other aspects of life - social, cultural and economic 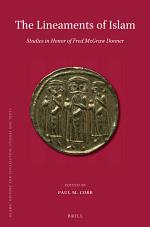 The Lineaments of Islam

Authors: Paul Cobb
Categories: History
In honor of Fred M. Donner's distinguished career as an interpreter of early Islam, this volume collects more than a dozen studies by his students. They range over a wide array of sub-fields in Islamic studies, including Islamic history, historiography, Islamic law, Qur'anic studies and Islamic aracheology.